Anti-fracking activists in New York State have conducted one of the first methane baseline assessments on an area that will soon be home to a natural gas compressor station. It’s hoped that by establishing a baseline measurement of ambient methane, residents will be able to prove fracking’s negative effects on air and water.

All drinking water is contaminated, but one thing it shouldn’t be is flammable. Unfortunately that’s often exactly what happens when Big Gas comes to town. Gas companies deny culpability by claiming that high levels of methane were present before they arrived. The baseline test, conducted by GasSafetyUSA in conjunction with Damascus Citizens for Sustainability, hopes to expose fracking’s true impact. 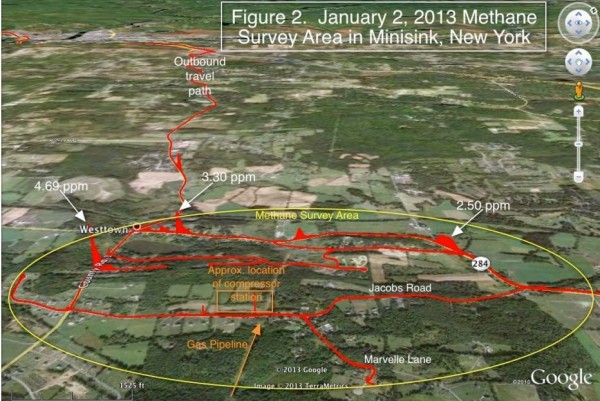 Image via Damascus Citizens for Sustainability

Methane Baseline Testing is a form of laser spectroscopy used to accurately measure ambient methane emissions. Earlier this year, GasSafetyUSA used the technology to establish baseline methane levels in Minisink, New York, future site of a compressor station that will be operated by Columbia Pipeline Group. The data indicate relatively low and reasonably consistent methane concentrations throughout the surveyed area, but researchers say this will change when the compressor station comes on line.

“Testing places the legal and ﬁnancial liability for any changes squarely back on the companies who own and operate the proposed compressor,” said Barbara Arrindell, Director of Damascus Citizens for Sustainability.

Accessing this data prior to gas-related activities—and retesting afterward serves as a form of “insurance” for communities like Minisink, which seek to redress pollution once it occurs. “Every single one of the 239 home owners and organic farmers within a half-mile of the proposed site will hold the company and the regulatory agencies accountable for this erosion of their air quality along with any adverse health and community impacts that result,” warned Pramilla Malick, spokeswoman for Stop the Minisink Compressor Station, a grass roots organization.