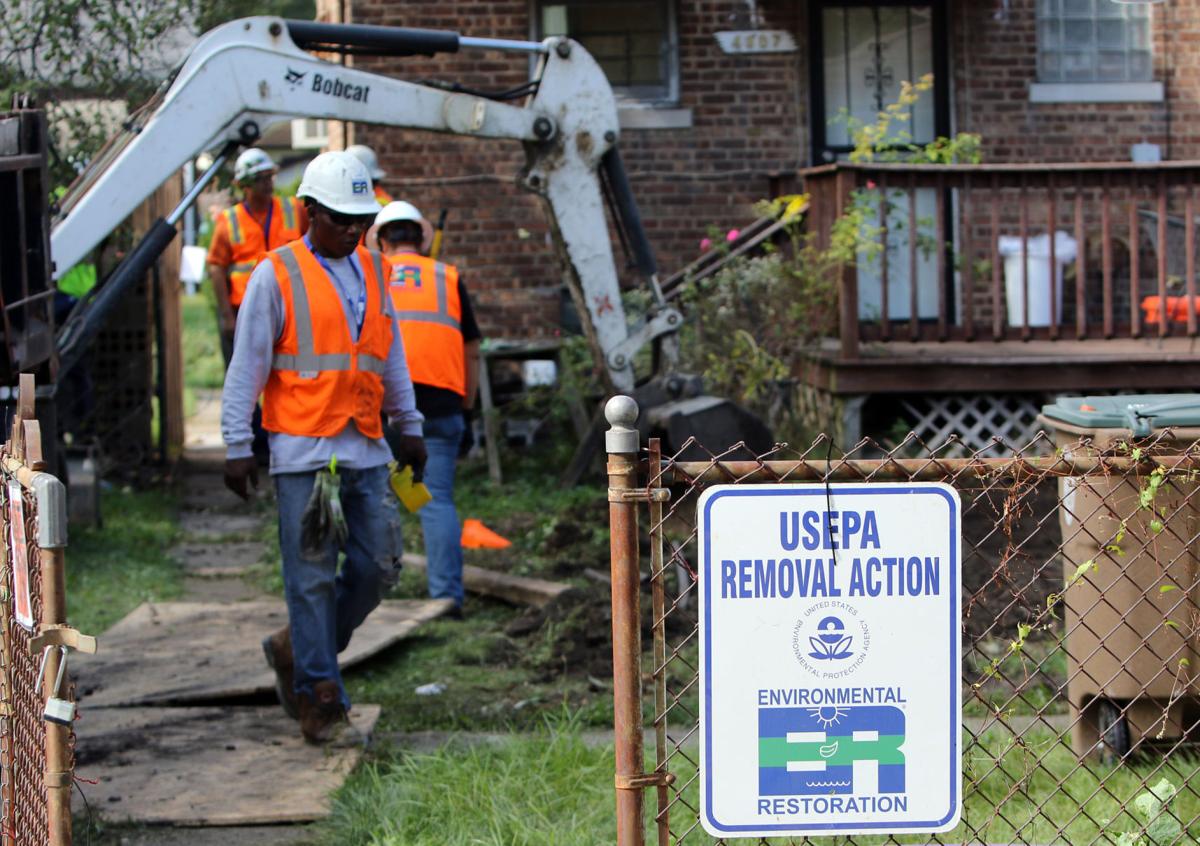 EPA contractors excavate contaminated soil in October 2016 at a home in East Calumet, which is part of the USS Lead Superfund site in East Chicago.

The soil cleanup ordered for zone 2 — the second of three residential cleanup areas at the Superfund site — could cost the potentially responsible parties $24 million, EPA said. The projected cost to complete indoor dust cleanup in zones 2 and 3 was $2.25 million.

EPA issues unilateral orders under several circumstances, including when potentially responsible parties don’t agree to perform cleanup work through a judicial consent decree or an administrative order of consent. Unilateral orders also are issued if potentially responsible parties refuse to perform work they previously agreed to under a settlement agreement.

EPA did not immediately respond to questions about circumstances leading up to the unilateral orders for the USS Lead site.

The potentially responsible parties include USS Lead, Atlantic Richfield Co., E.I. du Pont de Nemours and Co., The Chemours Co., U.S. Metals Refining Co. and Mueller Industries. The companies are liable for implementing all activities and will be responsible for ensuring the work performed by their contractors and subcontractors meets all requirements, according to the orders.

EPA completed soil cleanups at 109 properties in zone 2 this year and cleaned indoor dust at more than 64 homes with funds from a $16 million March 2017 administrative settlement agreement with Atlantic Richfield, DuPont, Chemours and Metals Refining. The agreement expires early next year.

The companies have five days from Dec. 14 to request a conference with EPA, after which time the orders become effective. The companies also must submit a written notice of their intent to comply on or before the effective date, the orders say.

“The soil cleanup in zone 2 is expected to satisfy all of the requirements outlined in EPA’s 2012 Record of Decision,” according to a news release. “EPA will also ensure that the potentially responsible parties follow agency protocol on interior dust sampling and cleanup.”

If EPA determines additional cleanup work is necessary to protect public health, welfare or the environment, the agency can modify or issue new orders.

“Residents remain concerned that even if the cleanup is executed as promised, their properties and homes will not be safe,” she said.

The current plan omits indoor dust cleanups in hundreds of homes, and the standards EPA uses to determine which homes receive dust cleanups remain a concern, she said.

EPA last week said the estimated cost for soil cleanup in zones 2 and 3 has nearly quadrupled from $22.8 million in 2012 to $84.9 million, according to a proposed explanation of significant differences document.

The $84.9 million in estimated costs do not include indoor dust cleanup or excavation work in zone 1, the site of the now-empty West Calumet Housing Complex.

Excavation work in zone 1 has been put on hold as the East Chicago Housing Authority prepares to demolish the complex and EPA continues work on a revised feasibility study.

EPA said the remedy, originally selected in a 2012 Record of Decision, for zone 1 will change along with the estimated cost. Therefore, the agency plans to document the changes in a Record of Decision amendment.

EPA started a 60-day comment period Monday on the estimated cost increase. The agency also plans to schedule a public meeting next month.

The agency also is accepting public comments on a proposed $22.6 million plan to clean up and mitigate exposures at the former DuPont industrial site, which is southeast of zones 2 and 3.

Several residents have been fighting for a say in court on the 2014 consent decree for the USS Lead site. Oral arguments on their motion to intervene are scheduled for 1 p.m. Jan. 16 before U.S. District Judge Philip Simon.

EPA Administrator Scott Pruitt on Dec. 8 named the USS Lead site to a list of 21 Superfund sites in the U.S. to be targeted for “immediate and intense attention.”